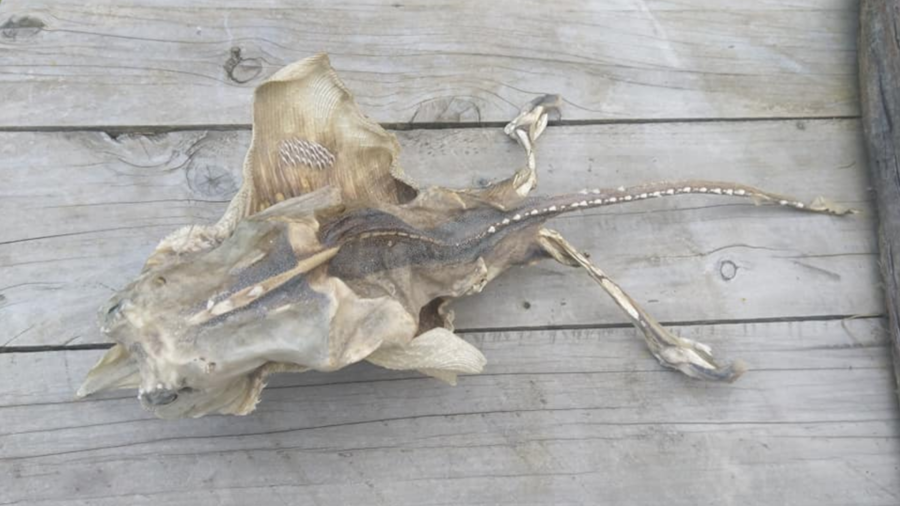 This past Saturday, Mary and her mother were cleaning the beach by the Rakaia Huts in Canterbury when they stumbled across the grotesque, fanged skeleton. Understandably, Mary screamed in when she discovered it was not just a piece of driftwood or a plastic bag.

"My first thought was that it was something alien, but I was more fascinated than anything," Mary told The New Zealand Herald.

Whatever it was, the creature had claws on its wings, two claspers, a long tail, an elongated head, and ferocious-looking fangs. Nightmare stuff by most people's standards.

The find was made even more unusual as the beach is very rocky with a steep drop off to the shore, making it almost impossible to swim there.

Mary was a mere skeleton at first, fearing it could be poisonous, but curiosity got the best of her and she brought it to her taxidermist neighbor who was equally stumped as to what the crazy critter could have been.

"I uploaded the photos on Facebook and we were all taking guesses, most people said skate," Mary continued.

"My guess is that it's some sort of deep-sea skate, maybe a Bathyraja abyssicola, which could have been picked up by a trawler." '

Facebook users offered such suggestions as: "A penguin? Lol I do not know, looks bloody creepy, "" Alien is definitely alien. Out with the tin foil hats "and" flying squirrel fish. "

"It's like a flat shark, it's a skeleton made out of cartilage. They spend most of their time on the bottom, Francis said adding that the wing-claws, known as alar spines, and the claspers are only found on male skates and are used for mating.