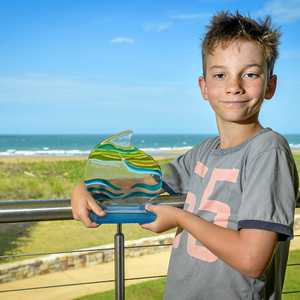 The 10-year-old Sid Crawshou made the rebels a passive and sincere message of salvation from the one-time plasma barrier reef.

The site has received a 2018 Reef Champion Award: Reef Youths are 15 years old, and on Wednesday, reduces the use of plastic straw in Yeppoon.

Sid, suffered a lot of nighttime.

"At first I was really scared, but I calmed down for my luck, because I'm surprised and happy to win," Sid said.

Sid assessed the night he was in the company of other laureates and nominees.

He said he liked the old dance performed at night.

The goal is to recognize the work of farmers, advanced officers, youth and community groups, to protect their Great Rebuilding Reef.

Sid wanted to convince other people that they are a good start to everything that can help reduce plasticity.

"If we do all we can do, we will contribute to solving a major plastic problem in our waterways," Sid said.

"When I knew that I was a plastic island in the Pacific, I tried to do something that was trying to make it stronger."

The manager of the Fizzstroy Basin Association Rebecca Franc Smith told Judge that he had a special reward for judges.

"In fact, they made a category for the strength of the youngster," Rebecca said.

"This is the first category for a gift, and Sid is a good example."

Sid is already planning for the next year, allowing him to continue his business.

At the awarding ceremony, he met with the Marine Biologist Nicol Nash in Cairns and started the "Last Straw" campaign.

"I talk with Nicole tonight and work together to reduce straws that will be used once next year," Sid said.