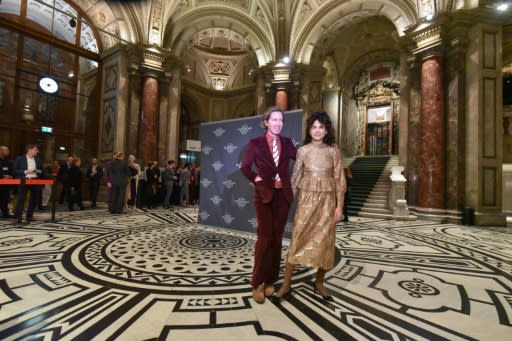 The Treasure Camera in the Kunsthistoris Museum in Vienna is a new feature on Tuesday, thanks to American filmmaker Wes Anderson and his partner, illustrator and author Juman Malfour.

Couples from a wide range of museums and museums, as well as a mix of six-month "Spitzmaus Mummy in Coffin and Other Treasures in Spitzmaus Mummy" showcases.

On the evening of Monday, the show was attended by long-time Anderson multi-year employees, such as actors Jason Schwartzman and Tilde Suinton.

"Maybe he's guilty of me, but I'm skeptical," he said.

Until the start of the project at the beginning of 2015, Anderson and Malthus often visited the museum, which can boast of Europe's largest collection of fine art.

After abandoning the labels and comments, visitors come to an end with the palette of sympathy and symmetry objects reminiscent of the visitors, such as the Royal Tenenbaums, Grand Budapest Hotel and Moonrise, the Kingdom.

"It's a centuries-old experience of eccentric cameras in rural Czechoslovakia," said Jaspers Sharp, modern and contemporary art curator at AFP.

Many of the parts really are actually a fantasy for any aristocratic – a medieval game board with a magic sculpture or a pearl of a phoenix elephant bone.

But they were not chosen rarely or according to the artistic reputation.

Eight rooms in the show have been replaced by a more intuitive look and focus on the scene of the center, such as a small coffin on a show theme hit in ancient Egypt.

Sharp said that Anderson and Malthus "are very good at choosing subjects together with their children, and in ways that show them.

"You will see different things in the exhibition, up, down, hiding."

Having a high official title, could the museum be condemned for its aspiration for publicity?

Sharp admits: "When you call someone, you always have to make noise," Sharp admits.

"Our facilities develop these layers and subtleties with their own interpretation," adds Sharp.

The exhibition will last until April 28, 2019 and will be transferred to Fondazione Prada in Milan next autumn.

US filmmaker Wes Anderson holds an eco-exhibition in Vienna with his partner, artist Juman Mouf

Famous British actress Tilde Suinton, who took part in the opening of the exhibition