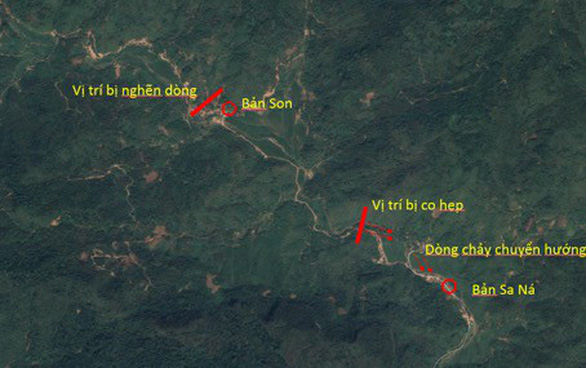 Trees flow from above to create temporary dams to block the flow – Photo: General Directorate of Meteorology and Hydrology

The terrible floods in the Ca-Na district of Quan Son District (Thanh Hoa) have been completed due to the fact that the trees flowing from the river have leaked for a temporary interruption to Son's flow, and then rainy rain caused a temporary barrier to the water. big

The tree above was dropped

The General Department of Meteorology and Hydrology informed Trans Hong Haga, Minister of Natural Resources and Environmental Protection, that the results of the investigation and investigation of the causes of flooding in the Sonic River caused significant damage to the village of Saa, Quan Son District. Thanh Hoa).

After the flood, after the flood, the Meteorology and Hydrology General Directorate cooperated with the Institute of Geological Sciences – Quan Son District (Thanh Hoa), Son's, to explore and explore the truth of the Na Méo commune.

Initially, these two agencies determined the favorable location of the Son streams resulting in the flood, the slopes of the basin, the rapid concentration of water, narrow streams, and numerous occurrences of constant expansion. The stone creates a clogged junction that causes flooding.

Particularly significant rainfall in the upper part of Son's Son flow in Laos, with realistic observation and satellite imagery, weather and weather analysis. According to the actual data measured in Na Meo region, on August, 3rd, 3-7 hours heavy rains are concentrated, the rainfall is more than 5 hours and 200 mm. 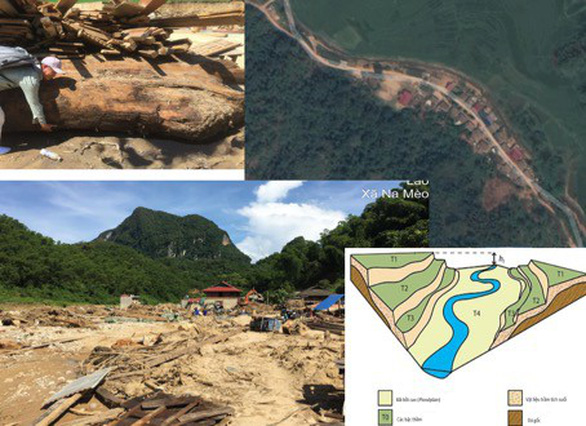 As a result of the research, scientists have found that the floodwaters are flooded with water up to 1.5-2 m in diameter. Photo: General Directorate of Meteorology and Hydrology

"The bulk of rainfall can climb huge trees of up to 1.5 m in diameter from 15 to 20 m from Laos forests to Vietnam," a statement reads.

The report was also clarified at the village of Saa – where there are still many Mo Mu and Sa Mok trees in the flood, according to a study of the dry, large forests, that patience is at the borders of Laos and Vietnam.

The investigation also revealed a 1.9 km high along the runway of the village of Son, along the route Saas, where the flow was increased, the width of the stream was 4 m and the depth was 6 m. width and depth when flooding.

"Without a flood, the flow will be very small. This part has two large and strong rocks, "the statement reads.

During the investigation, on August 3, at 6.30am, a large number of wooden and stone materials left the stream, drifting up to a height of 57 meters in the village of Saa from the dam.

"The number of trees, soil and rock increases. There are trees up to 15-17m in diameter up to 2m, so the water level is very fast. On August 3, at 7.00, a temporary barrier will be broken and dumps will arise. flood waves, large flows of large trees with sewage, "the statement reads.

When a high flood occurs, direct the flood landlord directly to Na Na Village, to the size of the trees and the soil.

"In Saa village this is a big loss. This observation corresponds to the video taken during a flood of water when bringing the trees to the houses of the village ", – it is reported in the message.

Large wooden panels cause trouble in the village of Saa – Photo: HA DONG

Do not settle in flooded areas

From the aforementioned conclusions, the Institute of Geology – the General Department of Meteorology and Hydrology has recommended that residents of the village of Sa-Na be deprived of flood relief. Also, do not settle in flooded areas where flooding is often the case.

According to geologists, in order to accommodate residents of the rivers and streams, it is necessary to avoid the mudflows with the near-near winding system. These construction sites are not planned sites.

In addition, the two agencies asked the Ministry of Natural Resources and Environmental Protection to conduct a study of possible dams that could cause flood and landslides and provide local authorities with a plan of reconstruction. The last river basin was inhabited by people.

Sa'y spread out after the flood

TTO: "Flooding is faster and frightening. Loss of people, loss of life on the morning of 3-8, pain in the heart … "This is the clamor of the village of Sa Na in the Ku-Son district after the flood of history. past 3-8 mornings.